This guide, compiled with Professor Raymond J Friel, School of Law, is part of the University's contribution to providing the necessary resources on which to make informed decisions as we as a nation and as a University chart a course through Brexit.

Established in 1987 by Graduates, the University of Limerick Alumni Association (ULAA) creates a link between you and your alma mater. The Brexit presentation by UL's Professor Raymond Friel to UL Alumni may be viewed below. 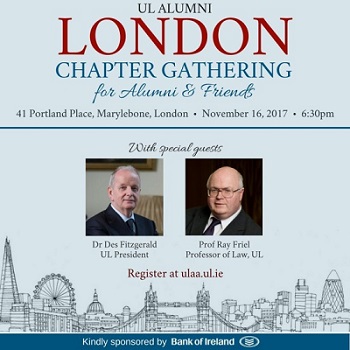 Professor Raymond J Friel, as Special Advisor to the President of the University of Limerick on European Policy with specific reference to Brexit joined the President at a UL Alumni Gathering in London on November 16.

This exceptionally well attended event was opened by Dr Des Fitzgerald as UL President who outlined in detail the achievements of the University, its focus on core values which prioritised people, the plans for the future development of the campus and the challenges facing us as a University.

Friel then continued on with an engaging exploration of the issues that Brexit presented for UL alumni, particularly those living in the UK in general and London in particular. Friel surveyed the current negotiations and made the point that he believed that despite at the time the UK floating a figure of £20 billion, it would take something in the order of £50-60 billion to satisfy EU needs. He compared it to a marital divorce where the separation agreement is not really about legal entitlements but satisfying the needs of the parties and that those needs had been built up during the relationship.

Friel also dealt with issues as varied as the Common Travel Area and the new trading relationship. He offered UL as a potential bridge between the UK, North America and the EU, with its strategic location at Shannon, pointing out that he viewed the relationship between UL and the Alumni as being mutually supportive.